Nissan on the background of the new Qashqai: Murano will live, Juke goes away forever, vagueness on SPIC 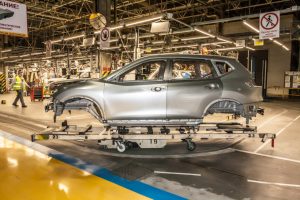 At the launch of the production of the updated Nissan Qashqai, which arrived in Russia with a big delay, we talked to the key managers of Nissan in Russia. Igor Boytsov, general director of the Nissan Manufacturing Rus plant, told us about the features of production, and Andrei Akifev, managing director of Nissan in Russia, about giving up Juke, the horizon of Nissan Kicks and many other things.So, two years after the world premiere, the updated Nissan Qashqai finally got to Russia: on February 7, the official assembly of the sample adapted for Russia was launched in a solemn ceremony, although in fact the assembly began earlier – on January 28. Sales will open in late March – early April, closer to this date will appear prices and configuration. In the set of modifications is expected replenishment: under the hood of the “Russian” Nissan Qashqai will start to put the 1.3 liter turbo engine, though not after restyling, but in general in the new generation. In Europe, this unit is offered in two versions in power: 140 and 160 hp, moreover, paired with both mechanics and automatic with two clutches.

Now for the plant. The export of cars assembled at Nissan Manufacturing Rus is in the directions to Kazakhstan and Belarus, but the geography of export of components is much wider. So, last year, 17,000 bumpers for the X-Trail were shipped to Europe, as well as more than 900,000 noise insulation parts (with a total weight of 450 tons), which go to the conveyors of Nissan factories. At the same time, Igor Boytsov noted that export programs “are of particular difficulty,” without specifying details. In 2018, with a capacity of 100 thousand cars per year, 56.5 thousand were collected here. Interestingly, during the same period, Nissan shipped to dealers much less Petersburg cars: 23,192 Qashqai, 22,878 X-Trail and 3,409 Murano. That is, a total of 49,479 pieces.

Sergey Arbuzov: In January, Nissan concluded SPIK with the Government of the Russian Federation, among other companies. At the same time, AvtoVAZ became an investor, while the rest received the status of “attracted party”. Just a few days later, the Government of the Russian Federation banned SPIKi groups. What would have happened if Nissan Manufacturing Rus had not had time to go to these “gates”, and he would have to conclude SPIK alone? By the way, was this option considered initially?
Igor Boytsov: No, it was not considered, because we are part of the alliance. Since AVTOVAZ is the main player in Russia, it was he who became the main signatory. What would have turned the case, if we had to conclude the SPIC alone – it’s hard to say, I won’t undertake to assume. The total investment in our SPIC is 70 billion rubles – it is clear that without partners we would not have drawn this amount.

SA.: Does the SPIC envisage penalties in case the group of signatories does not reach the stated indicators? Suppose AvtoVAZ fulfilled its obligations, and Nissan Manufechuring Rus did not. In this case, the whole fine – from you?
IB: No By signing the SPIC, we have committed ourselves primarily to each other. The contract does not provide for such a personal liability scheme, but, naturally, SPIKE sets forth “consequences” for non-fulfillment of the conditions. Actually, some details that relate to the participants and are outside the scope of the contract are still in the clarification stage, so it’s probably premature to talk about the plans of each of the participants.

Not all people who do not create added value have even been replaced by robots … Not all people who do not create added value have also been replaced by robots …
S.А .: What are the obligations of Nissan Manufacturing Rus in the framework of SPIKa on localization, production volume, on increasing the share of value added during assembly?
IB: Of course, all these obligations exist, and I will add here more investments in R & D and the achievement of a certain share of exports. However, I am not ready to share any specifics for the time being, because so far there are no details: we have general requirements for the entire group of signatories. Over the years for which the SPIC is designed – that is, until 2025, some conditions may change, which will entail a change in the proportions of obligations between participants, but the total numbers will be fulfilled by the alliance. This is one of the advantages of a group conclusion – each of the participants has more degrees of freedom. I repeat, I consider it not ethical to voice the numbers to you, because you need to coordinate them with those who participate in the contract, and not all the details are laid out yet. As for the volume of production – we will increase it to the extent that the market will be ready to accept it. As for localization, we should increase it in our interests – let’s wait until the government announces the general conditions of the game.