Project Aurus: at whose expense is this “Cort”, where did the Arabs go, and what is the UAZ? 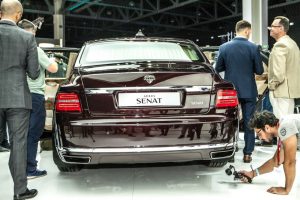 In 2018, five years after the start of the design work on the “Cortege”, we were shown the Aurus sedan at the Moscow Motor Show, and a little earlier Putin drove on the “limousine” version. Cars have not yet been certified, so the only thing that we can reliably say is that our commander-in-chief was driven in a car with Aurus appearance. While this is all, and it is in this wording. NAMI, who has become the developer of the project cars, refuses to comment on our site, but this does not mean at all that you don’t need to write about the “Cortege” – on the contrary. Information in open sources, being specially arranged, opens up new meanings and raises new questions. Our first story is about money: where did they go?

So, according to the order of the Government of the Russian Federation No. 1642-p dated September 13, 2013, signed by D. Medvedev, in accordance with paragraph 17 of Part 2 of Article 55 of the Federal Law “On placing orders for goods, works and services for state and municipal needs, ”the NAMI Research and Automotive Institute was determined (not selected, not appointed, but“ defined ”) as the sole performer of the state order placed by the Russian Ministry of Industry and Trade. This order consisted in the implementation of a pilot project for the development and production of domestic cars based on a single modular platform (EMP). Project cars should be presented in limousine, sedan and van. The station wagon is also supposed to be an SUV.

The cars will fit not only for “transportation and escort of top officials of the state, as well as other persons subject to state protection,” as was said in the order, but for everyone. For example, the project curator – Industry and Commerce Minister Denis Manturov – can easily afford a car “like Putin’s.” Firstly, according to his latest tax return (for 2017), the minister’s annual income was 213,566,746 rubles and 86 kopecks, and secondly, his Range Rover looks, to put it mildly, not patriotic.

The fact that the Ministry of Industry and Trade has acted as a formal customer of Kortezh, and explains the zeal of the Minister of Industry and Commerce: in fact, he assumed the responsibilities of a PR manager for the project. It is from him that we learn about all the key news. Manturov was engaged in “Cortege” still in the status of acting minister and did not slyly when, after Putin’s inauguration, he spoke about the excitement that visited him: well, how would a limousine die in the manner of an Armata tank in 2015 – this is the end of his career. In short, any speech by Manturov about the “Cortege” should be perceived primarily as a report before the first person of the state, and not at all as a message to the press and the public, as some of us may have thought.

Let us recall several messages from Mr. Manturov. For example, in May 2017, the minister claimed that the FSO (this organization is the actual customer of the project) will receive the first batch of cars of the “Cortege” project in 2017 — the agency should have transferred 14 cars, including a limousine. In this case, until the spring of 2018, the FSO was supposed to “evaluate” cars. Obviously, this is what happened, because on December 25, 2018, Manturov said that “… the production of prototypes for testing continues. This is the second series of prototypes, which eliminated the comments identified during the tests of the first series. ” This quote is just to the question “what did Putin carry on?” Along the way, it fits perfectly with our own data, according to which the V8 engine at the end of the year was not yet ready and was on fine-tuning tests.

Smart Arabs
Just over two years ago, on December 18, 2017, at ul. Avtomotornaya, 2 p. 1, office 201 (this is the territory of NAMI) LLC Aurus was registered, FGUP NAMI and PJSC Sollers became its founders in shares of 75 and 25%, respectively. Franz Gerhard Hilgert, who has been working in Russia since 1998, and since 2007 in Sollers, has become the general director of Aurus LLC. As was to be expected, it was Sollers that was chosen as a partner for the serial production of miracle machines on the EMP platform: there will only be enough US capacity to produce 200-220 copies a year.

Youtube has a record of the presentation of the brand Aurus (this name has replaced the “Cortage”), held in Moscow on May 23, 2018. See how Vadim Shvetsov, the general director of PJSC Sollers, indifferently says that the Aurusa hybrid installation will be adapted at UAZ for installation on a medium-duty truck, and how happy the owners of this vehicle will be. We will leave this information without comment, we just suggest that you look at the sad face of Vadim Shvetsov. Look – and you will understand that Sollers, this so-called “contract”, in all likelihood, received a load – this is in the practice of our state. Do you want to do business and ship “UAZ” to the Ministry of Defense – harness yourself in the “Cortege”.