Almost no crossover: whether to buy Infiniti FX II 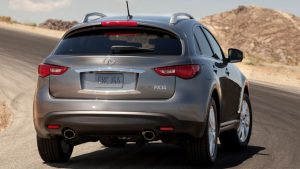 For half a million now you can buy a Duster in the maximum configuration or another decently packed compact crossover – but there will be as much sport and aggression in them as the therapeutic effect in a homeopathic solution of the liver of a barbarian duck. However, you can spend this money on something completely different: the second-generation Infiniti FX. Colleagues from Avito Auto suggest that the cheapest cars cost a million – respectively, in order to buy a decent car, you need to prepare about one and a half. What preference when choosing, and whether the FX is so vigorous and serious, what it looks like?

Generation change for the FX was bright, albeit somewhat polar: when looking at the new contours of the body, some decided that the crossover had become muscular and others that it was fatter. One way or another, he visually gained masses, although in fact the wheelbase grew by only 3.5 centimeters, and the total length by 5. Well, the recognizable profile with a long and massive hood, followed by the “cap” of the passenger compartment, also not gone anywhere. The profile, by the way, also emphasizes the layout features: to optimize the weight distribution, the power unit is shifted as far back as possible to the base. And this is just one of the characteristic passenger features of this car.

Actually, while developing and positioning the car in Infiniti, they didn’t hide it, but on the contrary, emphasized that they didn’t have quite a crossover. We can say almost no crossover at all: nobody was oriented on the “conquest of off-road horizons”, and the main goal was to give the largest and heaviest car maximum passenger habits. The Japanese have coped with this task – well, buyers and owners should not forget that their crossover has more in common with the Nissan 370Z coupe than with the Pathfinder: the platform has the first, the layout features and technical solutions, but the second is only a diesel engine .

Accordingly, when choosing a used FX, inspecting the body from below, one should traditionally pay attention to the condition of the bottom and whether there is old dirt in the cavities of the body and suspension as a sign of off-road driving. Of course, for the most part, the owners of these cars are people who understand what they have agreed to, but if we are talking about buying a car from a second or third owner, you cannot be sure of anything. Examining the body “from above”, you need not only to poke a thickness gauge into it, but also to check typical “indicators” such as a spare wheel niche at the rear and the state of the engine compartment seams in front: the image of FX as a daring car suggests that it is not going to church. And this means that the probability of an emergency past is higher here than that of some Land Cruiser 200. Similarly with the “crime”: the hijackers also like “precise” cars, so spend a little time and money on checking the past of the car using online services like autotech necessary.

The factory paintwork is subtle in Japanese, and the factory technology of “self-healing scratches when heated” with regard to age (the oldest machines are already more than 10 years old) has long since exhausted its capabilities. Some body elements – in particular, the doors – are aluminum here, so traditional pitfalls like rusting underside can not be expected. But, first, you still need to inspect the arches, sills, the edge of the windshield and the fifth door with predilection, and secondly, aluminum is also very susceptible to “decomposition”, so you need to check not only the paint. It is unlikely that you will find rotten FX, but the corrosion of the bottom and cavities in the arches is almost inevitable, and anything can be started up to an indecent state.

The FX suspension is not expected to be too cheap to repair and maintain: even without taking into account optional features like electrically-controlled shock absorbers and steering wheels, there are expensive aluminum levers and ball joints that are typical only for premiums, which are typical for premium ones. The front suspension is double wishbone: MacPherson, used in the first generation, was abandoned in favor of more driver settings. Behind – of course, a multi-link and a massive subframe, fastenings of which should also be carefully examined when buying. Still, by the way, among the features of the car from the bottom, we can note the rear wheel drives: wear of the splines leads to backlash, expressed in clicks at the start or when starting after reversing. In “successful” scenarios, the issue is solved by disassembly and lubrication.

Thus, choosing a car, you should decide in advance on your financial capabilities in terms of its content: if you are ready to get more drive for more money, you can overpay for the performance of Sport, where there will be petals on the steering wheel, thruster rear axle and shock absorbers with variable stiffness for electronic control account bypass valves.